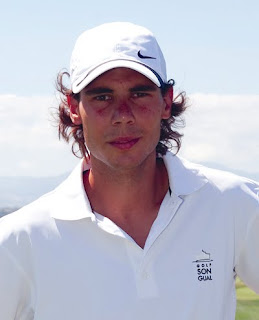 Rafa Nadal wears the Son Gual brand with pride
World number one tennis player, Rafael Nadal, swapped his tennis whites for golf whites when competing in the Torneo Blanco at the prestigious Golf Son Gual club in Mallorca.
The 2010 Wimbledon singles champion was relaxing ahead of his busy tennis schedule leading up to the US Open at Flushing Meadows at the end of the month, where he hopes to win his ninth Grand Slam title.

The annual Torneo Blanco event is open to members and VIP visitors with a white-only dress code. The ensuing on-course spectacle was enough to make any leading washing powder manufacturer jealous with envy and Nadal’s attendance put many of his fellow competitors in a spin.

Nadal is a frequent visitor to Son Gual and is the latest in a long line of celebrities charmed by the beauty, playability and serenity of the club, which is located just outside Palma on the sunshine isle.