Dream On - the golf book of the year 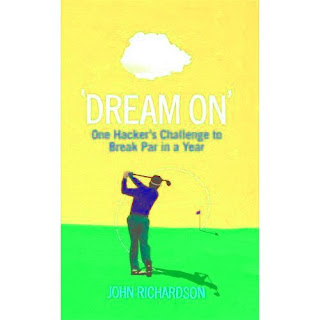 Dream On chronicles the attempts of a golf hacker to break par within one calendar year.

Former Ryder Cup captain Sam Torrance provided author John Richardson with the inspiration for his book title when he told him to “dream on”.

Irish golfing legend Darren Clarke told Richardson three years was a much more achievable aim. Fortunately for lovers of golf and books Richardson went his own way and achieved his goal with just 72 hours to spare.

Dream On is the story of that achievement.


“I’m heartily recommending Dream On to anybody who plays golf off any sort of handicap from 10 upwards.”
John Inverdale, BBC Radio5live

Learn how, despite having no discernible natural talent, precious little time and a lack of fitness, a man in his late 30s knocked 33 shots of his golf score.

Dream On will INSPIRE, ENTERTAIN and ASTONISH in equal measure; it is a story of disbelief and determination, trauma and triumph. But above all it’s a story of golf and what the human spirit can achieve if it really wants to.

Dream On has attained the #1 spot in ‘golf books’ at online bookseller Amazon – yet most people are unaware of it. That is because it hasn’t garnered its popularity through the traditional methods of book marketing.

Instead it used the power of social networking – Richardson’s Facebook and Twitter following exceeds 8,000 and that has established the book through viral ‘word of mouth’.

Richardson said: “I became fascinated by the opportunity that Twitter offers for its users to interact with authors. In the past, if you read and enjoyed a book, it was almost impossible to contact the author to let him or her know. Twitter provides a way for authors and readers to interact in a very contained and interesting way.

“You can’t come on and sell on Twitter, that’s not how it works. You have to be helpful and it has to be a two-way street. It is easy to look at it sceptically and ask where the money is in people tweeting about making a cup of tea. But there are strong communities on Twitter and it is a good way to get hold of people and improve a brand.”

And Richardson has expanded his profile as a sought-after motivational speaker and golf ‘coach’.

So now, Dream On is going ‘mainstream’ and will be available in High St bookshops. A second print run means the book can be sent out to ‘real’ journalists – not just the virtual kind – for book reviews and interviews, to present it to a new and wider audience.

Richardson has even had his hair trimmed and updated his Facebook picture.

To arrange an interview with inspirational author John Richardson, or to request a review copy of Dream On, please contact Dave Bowers, at the Azalea Group, on 0044 1730 711920 or email dave@theazaleagroup.com.

About the author
John Richardson, 42, from Bangor, Northern Ireland, spent more than 15 successful years in the coffee bar and catering industries, at one time running the largest sandwich business in Ireland.

He also wrote the definitive Wake Up and Smell the Profit: 52 Guaranteed Ways to Make More Money in your Coffee Business.

And then he found golf…

About the publisher
Belfast-based Blackstaff Press has been one of Ireland’s foremost publishers for nearly 40 years. In 1992 it was named UK Small Publisher of the Year by the Sunday Times and also won the AIB Better Ireland Communication Award.
Blackstaff Press is a member of the W&G Baird Group.
www.blackstaffpress.com