And the good news just keeps on coming out of Azalea Towers... 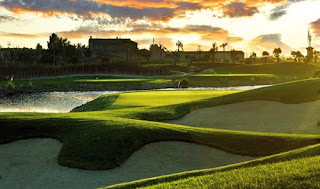 The 7,240-yard, Thomas Himmel-designed course is a new entry into the list at 91, a position which delighted managing director Andreas Pamer.

He said: “We have worked very hard to elevate Son Gual to be the best golf course on the island and one of the best in Spain. To achieve this recognition from such an influential magazine in such a short space of time is testament to the work put in by everybody here.

“But we will not sit back and congratulate ourselves; we will continue to offer the best golf possible and it is our intention to be regarded as the best course in Spain in time, and to continually improve our ranking within Golf World’s significant ratings.”

Son Gual was quickly recognised as a top course and was awarded the Mallorca Senior Open which it hosted for the first time in May, when former Ryder Cup captain Ian Woosnam compared the greens to those at Augusta National.

The 1991 Masters winner said: “It’s a bit like Augusta. There are a lot of slopes on the greens. You’ve got to get the ball on the right side of the hole – if you don’t you’ll be struggling. Miss it on the wrong side and you’re dead.”

Golf World’s description of the course said: “The course is laid out in two very distinctive halves, the front nine running along the extremity of the estate, with the second encompassed within its centre … making it one of the more spectacular courses in the Mediterranean region.”

The course’s reputation has been spreading far and wide with many celebrities taking time out to visit when on the island.

Liverpool winger Albert Riera, who used to live just down the road from the course, has gone on record to say it is his favourite course, and his fellow Mallorquine, tennis superstar Rafael Nadal, is also a regular visitor.

• Pictures of Golf Son Gual are available upon request

For further information on Golf Son Gual please contact Dave Bowers at the Azalea Group on 08700 330550, or email dave@theazaleagroup.com.
at 16:22