No not Man Utd and Chelsea; not even Tiger Woods and Phil Mickelson. That would be at least mildly interesting.

No, this constant battle for top spot is between two golf shoe plastic cleat manufacturers. 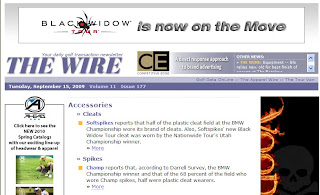 Every week, after the weekend's tournaments are complete the PR machines of the two rival manufacturers go into overdrive hoping that one day, somebody will be minutely interested in what they had to say. And every week, The Wire, bless it, tells us all about it.

I mean, come on, we're all in favour of a bit of positive PR but when do you finally accept you need a new hook for a release . . .?