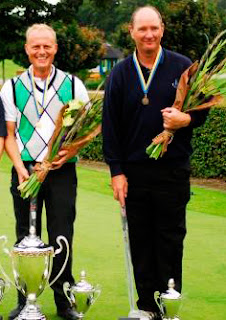 Stefan Mörkholt, left, with the 2009 DBO champion, Duncan Hamilton-Martin
The recently crowned Swedish Invitational champion, Denmark’s Stefan Mörkholt, will look to make it two wins in as many weeks when he lines up in the Disabled British Open (DBO) golf championship, which begins tomorrow (Saturday) at East Sussex National Golf Resort & Spa.

Mörkholt triumphed at the renowned Bokskogen GC, near Malmö, last weekend with the 2009 DBO champion, Duncan Hamilton-Martin, finishing third. Both golfers now head to Sussex where they will be among a capacity field for the third outing of the largest and most inclusive tournament in the country for disabled golfers.

Playing off 0.7, Mörkholt will have the lowest golf handicap in a field that will include players from as far afield as the USA – as 32-year-old Jason Faircloth becomes the first US player to compete in the event – and Pakistan. Other countries to be represented include South Africa, Spain, Ireland, Germany and Austria, in addition to a strong UK contingent.

The tournament is divided into three golfing handicap categories: up to 12, in category one; 13-20 in category two; and 21 to 28 in category three. Prizes are awarded in each category with an overall champion’s title up for grabs as well.

This year the DBO has received support from far and wide including the UK Government – both the Secretary of State for Culture, Media & Sport, Jeremy Hunt MP, and the Minister for Disabled People, Maria Miller MP, praised it for its inclusivity and legacy – the sport’s governing body, the R&A, the European Tour and Wealden District Council.

And, for the second successive year, the championship has received sponsorship support from IMSM, the leading ISO standard implementation consultant.

The Sky Sports-broadcast event is delivered through Tourism South East, and is part of Accentuate, a transformational programme of 15 projects, inspired by the Paralympic Movement, which seeks to change perceptions and offer opportunities to showcase the talents of deaf and disabled people. Accentuate is funded by Legacy Trust UK, creating a lasting legacy from the London 2012 Olympic and Paralympic Games across the UK, SEEDA and the regional cultural agencies.

Friday also sees the first day of the inaugural Junior Disabled British Open for young golfers – with a few places still available in the field.

As always, spectators will be afforded free entry to the event where there will also be a huge army of volunteers participating as marshals, ball-spotters, buggy drivers and caddies.